Sorry! Your browser is not supported.

To view this site you can download a newer version of Internet Explorer.

MDT in the Headlines

Part B: Cervical and Thoracic Spine

In a profession filled with many schools of thought, the McKenzie Method is probably one of the most misunderstood. Despite evidence and results, there are many misconceptions that follow the method.

“I think it’s susceptible to myths because there’s little knowledge about it,” says Laura Mannering, DPT, OCS, Cert. MDT, who runs her own practice in Washington, D.C. Part of that comes from its absence in academia, where it’s not commonly included in the curriculum.

The myth Mannering runs into often is the belief that MDT is a just set of exercises versus a method, “which really oversimplifies and takes away the notion that you have to be a critical thinker to do it well,” she says. “The thinking aspect is actually much more complicated because you’re assessing the patient every time. 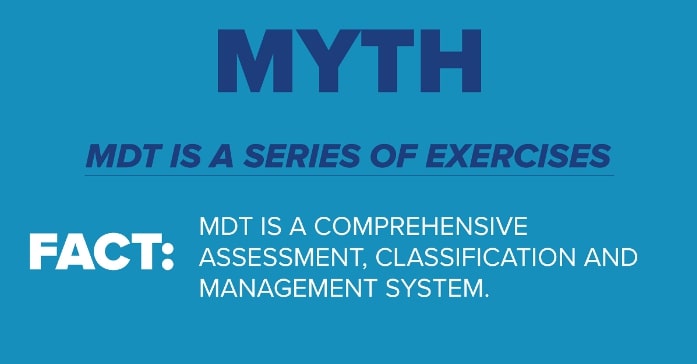 “Yes, you have to keep it simple to some extent and it is much simpler when you compare it to traditional physical therapy because there are fewer exercises,” she says.

The MDT system begins with a thorough mechanical evaluation to establish a “cause-and-effect” relationship between historical pain behavior as well as the response to repeated test movements, positions and activities.

A systematic progression of applied mechanical forces utilizes pain responses and mechanical responses to classify the disorder. Clinicians then develop a specific plan of care based on those examination results that empowers patients to treat themselves when possible.

Mannering was introduced to the McKenzie Method shortly after graduating in 2010 and eventually enrolled in a course a few years later. She had struggled with back pain for many years and actually became a “patient” in the class. It worked. And the MDT tenet of self-care assured it was a long-term solution. 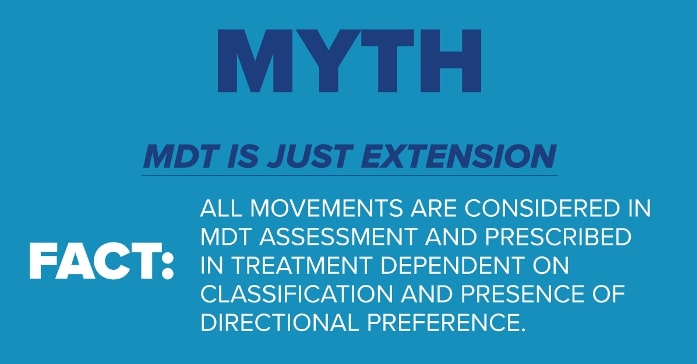 As both a patient and clinician, Mannering can confirm the McKenzie Method does not exclusively use extension exercises, another common misconception.

“There’s a myth that if you fail to respond to an extension, then you fail the McKenzie Method,” Mannering says. “It’s another oversimplification.”

Although extensions are a common treatment recommendation, all planes of movement are considered in both assessment and treatment, according to The McKenzie InstituteÂ®.

Another myth she runs into often is the belief that MDT practitioners don’t use manual therapy. They do, just not as often, Mannering says.

“We touch people less in the name of safety and in the interest of making people capable of self-care,” she explains. Self-care is a core tenet of the McKenzie Method, which Mannering recommends to PTs at any stage of their career.

“If you start going to the classes, see patients being treated live, realize it’s a process you can verify, you’ll probably start to see faster results with patients, which I think makes people more excited,” Mannering says. “It’s what allowed me to start my own practice because it really sets me apart from the competition.”